WHAT IS A M.A.C.S FACELIFT?

The MACS (Minimal Access Cranial Suspension) facelift is a procedure that was designed to give patients a subtle, refreshed, and more youthful look, without the intense recovery period necessitated by a traditional facelift. The MACS lift efficiently addresses a number of facial aesthetic problems that can develop over time, and offers a variety of rejuvenating benefits, including:

The MACS facelift is also called the “short scar facelift,” because it is less invasive than other facelift procedures and leaves a shorter scar. The MACS facelift supports and lifts sagging tissues in the cheeks, chin, neck, or nose area with a procedural technique that is similar to the High SMAS facelift, without surgically lifting the neck area. The MACS facelift is often a good choice for patients under the age of 60 whose aesthetic goals include a subtle, mid-facial rejuvenation, or who would like to reverse some of the initial signs of aging without undergoing a more invasive traditional facelift.

Dr. Moelleken has great interest in emerging techniques and what they may offer patients in his Beverly Hills and Santa Barbara offices. As time passes and procedures sort themselves into niches, the MACS lift has some surprising benefits to offer, and some surprising weaknesses.

The ‘plus’ of the MACS lift is that it elevates the cheek area nicely, much in the way a High SMAS procedure does. It may have a quicker recovery, especially if no incision for the neck is done.

The weakness of the MACS lift is that it rejuvenates the neck poorly, and to some the extent the jowl as well. In the way that it is usually done, heavy gathering sutures in the SMAS, the ‘bunched look’ perseveres longer than that for a traditional facelift or High SMAS. Who knew? When you read ‘for patients below 60’, this often indicates a weakness in the procedure that manifests most in older patients as a weakness in neck correction. 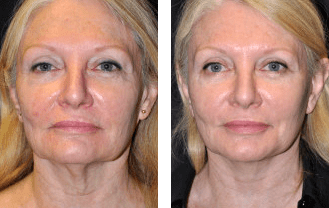 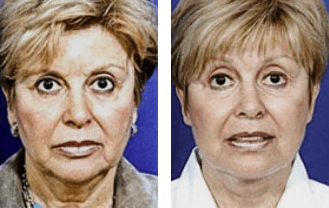 The MACS facelift is performed under general anesthesia or (in some cases) local anesthesia, and takes between 2-3 hours to complete. During the procedure, Dr. Moelleken will make strategically placed incisions along the hairline and in front of the ear in order to separate the skin from the fat and muscle, and will then lift the skin vertically (as opposed to the horizontal lifting of a traditional facelift). He will redrape (not pull) the middle layer, and will use permanent sutures to resuspend the deeper structures of the face, thereby reversing the skin-sagging effects of gravity and age. Lastly, he will excise any surplus skin and close the incisions, leaving patients with a natural, rejuvenated look and a small, discreet scar. Dr. Moelleken uses his trademarked ear closing techniques to leave patients with virtually invisible scarring. The earlobe and tragus are reformed carefully to avoid visual detection completely.

Recovery after a MACS lift is less extensive than with a traditional facelift, and although some mild pain, bruising and swelling can be expected, the severity and duration of the healing period is shortened, with most patients resuming light activities within a week, and returning to work and their normal activities in a little over a week, with exercise following by weeks 3 to 6.

Call us today to schedule your
appointment in Beverly Hills or Santa Barbara.

At Moelleken Plastic Surgery, our patient-centric philosophy ensures that you will receive the highest quality of care throughout your aesthetic enhancement experience. We take pride in providing our patients with safe and effective cosmetic surgery procedures, and beautifully natural-looking results. Our skillful staff understands how precious your time is, and will take care to ensure that your surgery fits conveniently into your busy schedule. You will never feel rushed while in our care, as Dr. Moelleken will take the time to provide a comprehensive overview of your treatment options and procedural details.

If you would like to learn more about the MACS facelift technique or other face plastic surgery procedures, please contact Moelleken Plastic Surgery today. We look forward to speaking with you, and to scheduling your initial consultation with Dr. Moelleken.