Plastic surgery is a dynamic industry, and this is why terms like liposuction and liposculpture are often intertwined. They are both very popular among people who would like surgical procedures to reshape parts of their bodies. It has to be noted that liposculpture is actually a form of liposuction and both procedures remove unwanted fat from certain parts of the body. Both procedures are forms of cosmetic surgery, intended to improve a person’s physical appearance.

The History Of Liposuction

For centuries people have tried to change their fat content and body contours. Initially, fat was excised with the use of a scalpel and large incisions. Later, attempts were made with the use of a curette to scrape the fat out. Unfortunately, both of these techniques produced uneven results and were prone to heavy blood loss. In the 1970’s, Giorgio Fischer began using a curette devise attached to suction. French physicians Illouz and Fournier further developed this concept by using low level suction tubes attached to a tube like instrument called a canula. This allowed for the removal of large amounts of fat but it still yielded uneven results and there were major issues with bleeding.

In 1987, Dermatologist Jeffrey Kline, developed the tumescent technique. Tumescent liposuction refers to a technique that uses large volumes of very diluted local anesthesia injected into fat causing the targeted areas to become tumescent, or swollen and firm. He started by infusing lidocaine, a numbing agent, to small areas and removing the fat with small canulas. This worked well but he was limited by the amount of lidocaine he could safely use. He then realized that he could dilute the lidocaine with saline and decrease bleeding by constricting the blood vessels with epinephrine. This allowed for very little bleeding and the ability to safely remove large amounts of fat while the patient was awake. Since then, the tumescent liposuction method has become the standard of care for liposuction because the procedure is safe, the blood loss is minimal, and the results are smooth and desirable. The risk of general anesthesia is eliminated and with the use of smaller instruments, physicians are now able to sculpt with great precision giving the patient the shape they desire.

Liposuction is one of the most popular plastic surgery procedures in the United States. Every year, hundreds of thousands of men and women undergo the procedure to eliminate unwanted and persistent pockets of fat. Liposuction is a technique for re-contouring your body by deleting fat deposits. The removal of fat is permanent and surprisingly the amount of fat removed is usually less than 10 pounds. The way the overlying skin where the fat was extracted is “re-sculpted” makes it appear more fat was removed however. Many individuals seeking liposuction do so after they are unable to achieve the desired physical results they want through diet and exercise alone. It is important to note that liposuction is a serious medical procedure and should not be considered a simple weight loss method. Liposuction technology has advanced rapidly in recent years to the point where select types of technology can now be used to refine and remove small areas of fat around your face, waist, knees, and ankles. Liposuction has been a staple of plastic surgeons for several decades used by both men and women to eliminate areas of excess fat from their thighs, stomach, love handles, buttocks and the chest area as well. All forms of liposuction can be used for liposculpture.

Body contouring, also known as liposculpture, liposuction, or lipoplasty, is a form of cosmetic surgery where your fat is removed typically for aesthetic appeal. We live in a time where people are very concerned with their body image. Whether we are trying to live up to the “ideal” body as portrayed by the media or we are unhappy with a particular aspect of our body due to aging, childbirth, genetics, environmental stress, or other factors, cosmetic surgery is becoming an increasingly popular choice worldwide. The world of cosmetic surgery can be very confusing, as there are many choices offered. At Neo Surgery Center, double board certified Dr. Brent Moelleken, M.D., F.A.C.S., will educate you about the benefits and drawbacks of anybody contouring procedure you are considering.

Liposuction is the aspiration of fat from your body using a suction technique while liposculpture uses liposuction to sculpt your body. Apart from removing fat deposits, liposculpture also involves shaping the remaining fat so that it is more symmetrical with your underlying muscles. This implies that liposculpture is actually liposuction with added re-shaping included. It is important to note that in most cases, liposculpture is used to remove relatively small volumes of fat. People who are interested in this procedure need to understand these details clearly so that they will make the right decisions. Liposculpture is usually performed in accordance with the tumescent technique. This is a process by which a saline-based anesthetic is injected into the targeted areas causing your fat to swell up and form into a liquid. The injection also serves as a form of anesthetic, which makes the area numb so there is no need for general anesthesia. The fat is easily suctioned out and you can return home in a matter of hours.

Your Liposculpture With Dr. Brent Moelleken

Liposculpture is all about the benefits of safety, convenience, and speed and is not as invasive as liposuction so your recovery period is shorter. All of the rewards make liposculpture a very popular procedure for a growing number of men and women who want fat removed from nearly any area of their body. People who have extra weight, flab and bulges tend to feel self conscious about those areas of their body because they look very unsightly. Liposculpture can safely remove your fat, leaving smooth consistent results. Because such small instruments are used, it is easier for Dr. Moelleken to artistically sculpt with more attention to details giving you the shape you desire. 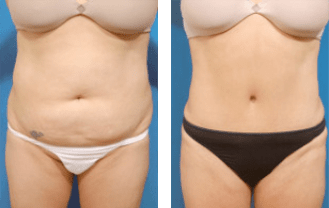 There are many different liposculpture and liposuction surgery techniques available to help you achieve the body you want. With today’s technology, liposculpture surgery has become a procedure that meets the highest safety standards, requires minimal downtime, and gives you excellent results.

Some of the techniques used include:

This technique uses negative pressure or vacuum suction to suck out the fat. It can be a traumatic procedure that results in significant swelling and bruising. In traditional liposuction, cannulas have a relatively large diameter and remove fat quickly. However, with the use of large cannulas (diameter greater than three millimeters) there is an increased risk of irregularities and depressions in your skin.

This procedure uses a mechanized tip, which nibbles away at the fat. Little effort is exerted but there is no distinguishing of fat from nerves or blood vessels.

Commonly referred to by the most popular manufacturer name SMART Lipo, this is a relatively new technique that uses a laser to rupture the fat cells, liquefy, and remove them through a very small cannula. This technique can produce some skin tightening, but has limited effectiveness because it removes approximately 250ml of fat only.

Also known as UAL, this procedure is on the cutting edge of liposuction technology. The fat cells are liquefied for easier removal with ultrasound waves emitted from a special cannula.

A minimally invasive procedure that uses a smaller cannula to remove fat from hard-to-target areas.

This technique uses a jet of water to flush out your fat. This technique produces little tissue trauma hence recovery is very fast.

This is the newest technique and it uses radiofrequency to melt your fat externally with simultaneous suctioning of your fat internally. This technique achieves the greatest degree of skin tightening.

Large amounts of anesthetic fluid are injected into the fatty areas for this technique. The fluid causes the fatty tissue to swell (tumesce), making it easier to remove through a cannula. This procedure usually involves less bruising and blood loss. Tumescent liposculpture refers to the use of tumescent fluid to distend and numb fat tissues prior to sculpting with liposuction and this technique has revolutionized fat reduction surgery. The infiltration of tumescent solution serves many purposes including, numbing the tissues, so minimal

Similar to the tumescent technique, the amount of liquid injected is much less. Each liposculpture surgery has advantages and during your consultation with Dr. Moelleken, together you can determine which surgery technique will work best for you.

What To Expect Throughout The Process

Prior to your procedure, the problem areas are carefully mapped out so Dr. Moelleken knows exactly what fat to remove. He will assess fat thickness and contours during your surgery, continually checking that your desired shape is being achieved. After your procedure, you will have to wear compression garments for a few weeks to reduce swelling and aid in skin contraction. This helps to reduce any unevenness as well. Some degree of discomfort, swelling, and bruising are to be expected but the final result is worth it. Liposculpture does not require large incisions. In fact, liposculpture incisions are so tiny they close within a few days and do not leave scars.

The steps involved in your liposculpture procedure are:

Call us today to schedule your
appointment in Beverly Hills or Santa Barbara.

Like any medical procedure, liposculpture surgery has advantages and associated risks. Liposculpture is an outpatient procedure requiring local anesthesia to reduce the potential for risks and complications, so you will remain awake, comfortable, and alert throughout your entire procedure. Liposculpture patients recover quickly and with very few side effects. Patients may experience minor pain for a day or two before returning to their normal routines but every patient is unique so recovery depends upon the extent of the surgery and the amount of fat removed. Although rare, some complications that can occur include skin dimpling, loose skin, abnormal fat collections, and infection.

Areas Of The Body Liposculpture Can Target

Liposculpture is a surgical procedure to define a more pleasing body shape and appearance. The liposculpture procedure can be performed and treat the following areas of the body:

The most popular areas treated are the: thighs, buttocks, stomach, breasts, and arms.

Thigh liposculpture removes fat and tightens the skin in the area around your thighs. Thigh liposuction is often part of a complete thigh lift. Many women opt for this procedure when they are displeased with the way their legs look.

Along with the thighs, improvements to the buttocks are a very popular liposculpture procedure.

Another popular option for men and women is having fat removed from the abdominal area. Abdominal liposuction is a technique for re-contouring the body by permanently removing fat deposits from the abdomen area.

While breast augmentation is popular; it is a different type of cosmetic surgery than liposculpture. When it comes to the breast area, liposculpture works to reduce the size of the breasts. Many men and women have this procedure performed for health concerns that relate to having disproportionately large breasts.

This type of liposculpture targets excess fat that accumulates in your upper arms. Having fat removed from your arms and tightening the skin in the same areas is a rewarding procedure. Arm liposuction is often part of a complete arm lift.